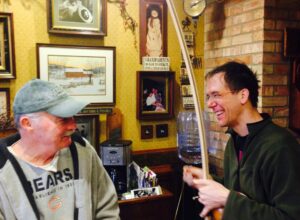 Over the past few months, I have become closely reacquainted with an old family friend, David “Snappy” White, from Janesville, Wisconsin. Snap used to drive the Snap-On Tools truck around southern Wisconsin to sell excellent tools to professional mechanics in the trade. My father was one of those mechanics. Outside of the business, the two men and their families became friends, living only two blocks apart from one another.

In retirement, Snappy has become an expert woodworker and has set up a meticulous “shop” in his basement. He is constantly growing, refining techniques, and taking on new and interesting projects and challenges.

For one of his sons, Josh, and his grandson, Snap worked with his brother-in-law, Lloyd, to create a pair of traditional hunting long bows. These are gorgeously refined laminates that require a jig to mold and glue the multiple strips of wood in place.

At home with my parents one weekend, we were invited over to the Whites for dinner. Snappy proudly showed us the hunting bow. My thoughts instantly turned to musical bows.

“Snappy, would you be interested in making me a berimbau?”

“Never say no!” was his characteristically upbeat reply.

After another meeting in Iowa with Lloyd, Snappy came up with a prototype jig and a first instrument design. It was a lovely specimen, consisting of thin strips of yellow heart, black walnut, and maple. 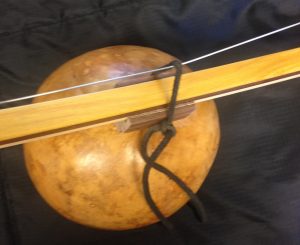 Unfortunately, it was squared off in shape and therefore not tunable in the traditional manner. It has a beautiful and warm voice, however, and was a pleasure to play.

What I thought was a nice and simple project turned out to be just the tip of the iceberg. Snappy took it back to the drawing board! 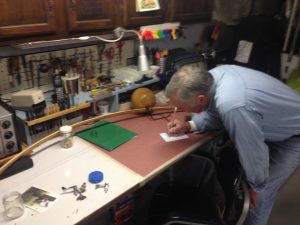 It turns out that Snappy became completely invested in this project. He hasn’t stopped talking about it now for months. And he keeps making further and further refinements! We are now at prototype number 4! We are in the process of creating tunable instruments with bridges for timbral clarity, just the right weight and circularity of form to be comfortable in the hand. The refinements are now sophisticated and incredibly detailed!

Everyone in Projeto Arcomusical is thrilled at the prospect of a set of tunable instruments that will make playing our music that much more accurate and sophisticated! 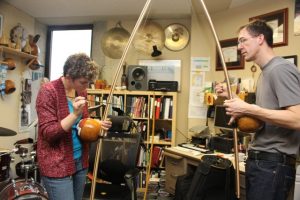 Alexis and I improvising on a pair of new Snappy-baus!

I am thrilled, humbled, and honored to be working with such a committed artist and friend! Thank you very much, Snap!

Happy New Year 2015!
News from the Fulbright Foreign Scholarship Board!