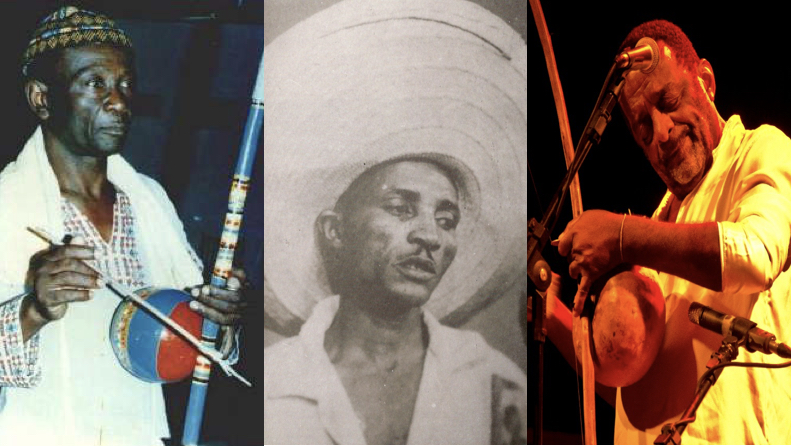 Naná Vasconcelos (1944-2016) was a world-renowned percussionist and virtuosic pioneer with the berimbau, having taken the instrument out of its traditional role in the art of Capoeira and developed a completely new virtuosic style for the instrument.

Gregory Beyer published, “The Voice of the Berimbau,” an interview with Vasconcelos in the October 2007 edition of the journal Percussive Notes. Read it here:

Voice of the Berimbau

In 1963, as a direct result of the worldwide success of the 1962 Brazilian film, O Pagador de Promessas, a group of respected capoeiristas from Salvador released a recording one of the first capoeira music LPs in the Brazilian market. Mestre Traíra – Capoeira da Bahia, featured vocalists Mestre Traíra (José Ramos do Nascimento, c. 1916-1970) and Mestre Cobrinha Verde (Rafael Alves França, 1917-1983), and “golden berimbau” competition winning berimbau player, Mestre Gato Preto (José Gabriel Góes, 1929-2002), playing gunga, alongside his companions Mestres Chumba (Reginaldo Paiva) and De Guiné (Vivaldo Sacramento). To this day, this album is considered a hallmark and a reference for generations of Angoleiros due to the incredibly complex, tightly woven counterpoint of the three berimbaus playing together. Mestre Gato had an unmistakable style playing berimbau, and unlike current trends, his gunga tuning was in the middle of the consort, between the viola on the high end and not médio but “berra-boi” on the low end. On this recording, the “berra-boi” frequently played toque São Bento Grande to begin, grounding both rhythmically and harmonically the gate set by Mestre Gato Preto on his gunga.

In November 2019, Projeto Arcomusical received an invitation to perform at the Percussive Arts Society International Convention to perform music from our second album, Spinning in the Wheel. Gregory Beyer’s second sextet for Arcomusical is subtitled “Traíra” and is an homage to this fantastic recording. To understand the powerful influence of the album on Beyer’s composition, read Beyer’s September 2019 Percussive Notes preview article, “Arcomusical: Honoring the Berimbau.”