During the summer of 2007, Due East traveled to Brazil to perform in Campinas and São Paulo, Brazil. After our concerts, we traveled to the north, first to Salvador da Bahia and second to Recife, Pernambuco, to conduct interviews with two master berimbau performers, Mestre Valmir Santos Damasceno and Naná Vasconcelos (1944-2016).

Mestre Valmir Santos Damasceno is a co-founder of the International Capoeira Angola Foundation (ICAF or FICA) and is director of FICA-Bahia, located in Bahia’s  capital city of Salvador.

Naná Vasconcelos (1944-2016) was a world-renowned percussionist and virtuosic pioneer with the berimbau, having taken the instrument out of its traditional role in the art of Capoeira and developed a completely new virtuosic style for the instrument.

I published an interview with Vasconcelos in the October 2007 edition of the journal Percussive Notes. Read it here: 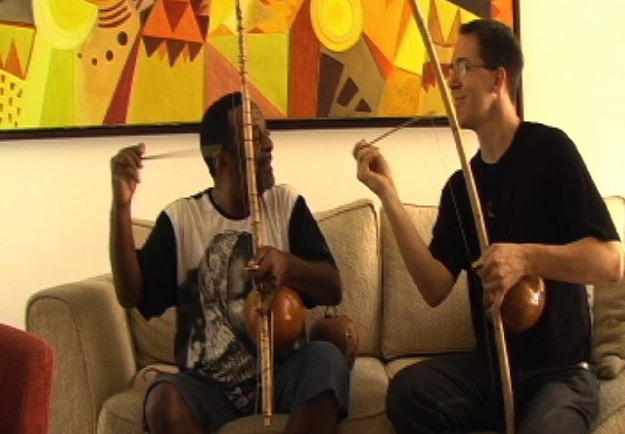 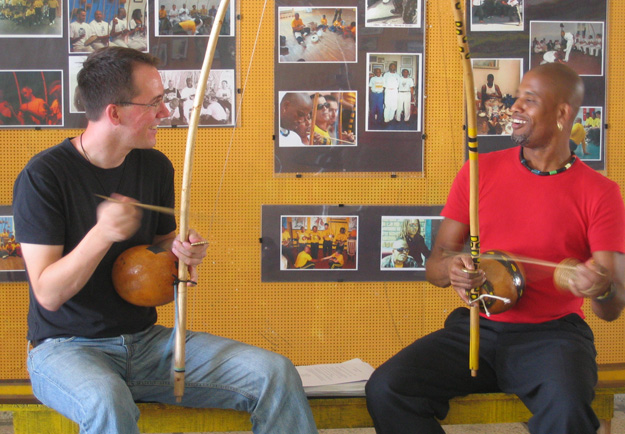 Mestre Valmir and Greg improvising together

In 2004, Arcomusical Artistic Director Gregory Beyer completed a doctoral thesis dedicated to the Afro-Brazilian berimbau in its multiple facets. Divided into three principal sections, the thesis provides an overview of the berimbau in Brazil (specifically in capoeira and in the hands of the late Naná Vasconcelos (1944-2016), details the African gourd-resonated musical bow relatives of the berimbau, and analyzes compositions that Beyer either wrote or commissioned in the early years of his work with the berimbau as a solo instrument.

“The purpose of this thesis is to collect my historical findings and musical transcriptions in a way that illuminates the development of my own creative project with the berimbau. I intend to create links between the old and the new, by drawing parallels that guide creative work along the lines of what has been done in the past. Because the research is in large part my own, or my extrapolations and extensions of what research has been done before me, the story is a personal one. Telling it shall at times take on a narrative form that I hope is engaging and informative.”