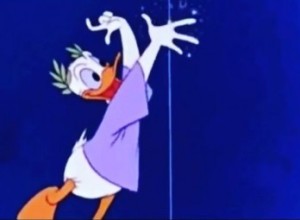 During our UARAP sessions, Alexis and I discovered that we were both fans of a somewhat obscure Walt Disney film, “Donald Duck in Mathemagic Land.” Little did I know when I was exposed to this in 10th grade geometry class that it would carry special resonance in my percussion career.

In my DMA studies at the Manhattan School of Music, Nils Vigeland gave a lecture on the monochord. Having already performed internationally with Dean Drummond’s New Band, whose mission is the curation and further development of the Harry Partch instrumentarium and musical legacy, I was familiar with this mathematical way of thinking about intervals.

Later on, when I became familiar with a Mozambican musical bow known as xitende, it suddenly occurred to me that the berimbau is nothing more than a monochord and that the gourd resonator can divide the wire into mathematically specific ratios. A new way of thinking was born. Since 2004, all of the music that Arcomusical has generated through commission and composition has made ratio tunings a central focus.

To watch Donald Duck in Mathemagic Land in its entirety, click here.