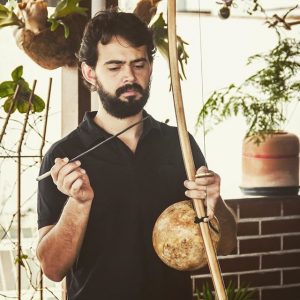 Rafael Matos holds both BM and MM degrees in Percussion Performance from UFMG, where he studied with Professor Fernando Rocha. Winning the Young Musician BDMG competition in 2010 allowed him to participate in the Minas Mundi international academic exchange program. As a result, Mr. Matos traveled to America to Baylor University to study percussion with Dr. Todd Meehan. Matos has participated in masterclasses with percussionists such as Carlos Tarcha, Eduardo Gianesella, Eduardo Leandro, Florente Jordelet, John Boudler, Ricardo Bolonha, Grergory Beyer, and Doug Perkins. From 2008-2013 Rafael was frequently invited to perform with the Philharmonic Orchestra of Minas Gerais. In 2014 Mr. Matos became a regular member of the Symphonic Orchestra of Minas Gerais, a position that has allowed him to share the stage with renowned artists such as Milton Nascimento, João Bosco, Rosa Passos, Gal Costa, Lenine, Nana Caymme, Ivan Lins, Wagner Tiso, and many more.