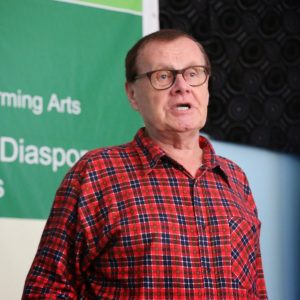 Gerhard Kubik (born December 10, 1934) is an Austrian music ethnologist from Vienna. Kubik studied ethnology, musicology and African languages at the University of Vienna. He published his doctoral dissertation in 1971 and achieved habitation in 1980.

Kubik went to Africa every year for the past 48 years. From 1958, he has published over 300 articles and books on Africa and African-Americans, based on his field work in fifteen African countries, in Venezuela and Brazil. Kubik’s topics are music and dance, oral traditions and traditional systems of education, the extension of African culture to the Americas (especially Brazil) and the linguistics of the Bantu languages of central Africa. Kubik has compiled the largest collection of African traditional music worldwide, with over 25,000 recordings, mostly archived at the Phonogrammarchiv Wien in Vienna.

Kubik performs as a clarinetist with a neo-traditional kwela Jazz Band from Malawi that has been highly successful performing throughout Europe and Brazil.