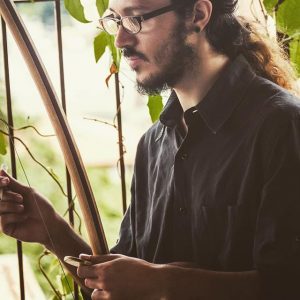 Breno Bragança holds a BM in Percussion Performance from the Federal University of Minas
Gerais (UFMG), an MM from the Federal University of Goiás, and is currently a doctoral
student at UFMG under the orientation of Dr. Sergio Freire. Bragança is frequently invited to
perform and record with the orchestras of the Goiás Philharmonic and the Philharmonic
Orchestra of Minas Gerais, under the direction of conductors such as Isaac Karabtchevsky,
Catherine Larsen-Maguire, Fábio Mechetti, and Neil Thomson. Breno has developed an
extensive contemporary music solo and chamber music repertoire and has given concerts
throughout Brazil as well as in the United States. Much of this music has involved interactive
electronics. He is a founding member of Grupo Tectum, a percussion ensemble that also
especializes in works for percussion and electronics. He has participated in Brazilian premiere
performances of works by such composers as Iannis Xenakis, John Luther Adams, Maurício
Kagel, João Pedro de Oliveira, and Baljinder Sekhon, and is a composer in his own right.