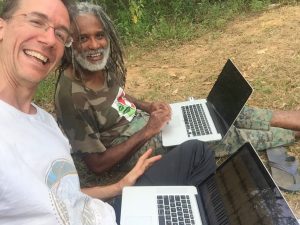 Mestre Cobra Mansa (b. 1960 in Duque de Caxias, Rio de Janeiro) is a founder of the the International Capoeira Angola Foundation, perhaps the largest Capoeira Angola organization in the world. In addition to being an incredibly well respected teacher and capoeirista, he is a scholar, historian, and documentary filmmaker. In partnership with filmmaker Richard Pakleppa and capoeira historian, Matthias Assunção, Cobra Mansa produced Jogo de Corpo , tracing the roots of capoeira Angola to its origins in the traditional body games of southwestern Angola.
Listen and watch Mestre Cobrinha and many other Angoleiros discuss the philosophy behind the traditions and the game of capoeira Angola.