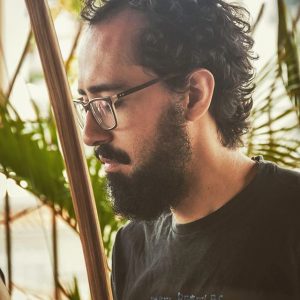 José Henrique is a percussionist of the Symphonic Orchestra of Minas Gerais. He earned a BM in Percussion Performance from UFMG and is currently working on an MM from the same institution, developing research concerning new musical approaches to the berimbau. José initiated percussion studies in 2008 at the Artistic Education Foundation where he studied with percussionist Aluísio Brant and composer Sérgio Rodrigo. From 2009-2013 Mr. Henrique was a member of the UFMG Percussion Group, performing in the United States and throughout Brazil. While in the USA, he had the opportunity to present an original composition for percussion and electronics at the Percussive Arts Society International Convention (PASIC) in Indianapolis. In addition to his work at the orchestra, José is also a member of the experimental music groups Tectum, Signum, and Arcomusical Brasil. He has recorded with groups such as Corpo Escola de Dança, Oficina Música Viva, and UAKTI, the famed percussion group with whom he performed throughout 2015. Henrique won the 2016 national PAS orchestral mock audition contest in Brazil allowing him to return to PASIC in Indianapolis in 2017 as an orchestral mock audition finalist.